The Order Of Sharps And Flats – How To Apply It

The order of flats and sharps is important to not only musicians studying music theory, but also for songwriters. If you have a passion for writing music and learning songs, then chances are you will want to know the order of sharps and flats.

As you know, every key has a unique set of sharps and flats. The purpose of this guide is to show you the exact order as well as present it in the easiest way.

I am going to break this down in a way that will highlight how to understand sharps and flats for pianists, as well as all other instruments.

The order of sharps can be memorized by using this simple acronym: Fat Cats Get Dirty After Every Bath or F C G D A E B.

You can apply the circle of fifths now in order to get to figure out which keys have which sharps. You can also simply use a piano and jump up 5 notes per key.

For example, C Major has zero sharps or flats. Start on C and go up 5 notes and you will land on G Major. By applying the order of sharps, you will see that G Major has one sharp and that sharp is F#. This means that you will have these following notes: G A B C D E F# G.

D Major is the next key and it has 2 sharps. You can figure this out by starting on G and going up 5 notes. You then can look at the order of sharps and see your two sharps are going to be F# and C#.

If we take another example we can go up to A Major. It will have 3 sharps and those are going to be F# C# and G#. If you break down the notes that will be in the scale, you will get A B C# D E F# G# A. If you’re seeing a trend here, that’s good. Everything with sharps and flats follows the same formula, which goes off of the circle of fifths.

The order of flats can be memorized by using this simple acronym: BEAD Greatest Common Factor or (B E A D G C F). When trying to figure out the order just repeat this in your head and it will make it simple to determine what the flats are.

To determine what the first key that contains flats is, start on C on your piano and go down 5 notes. You will end at F. F Major is your first key that has a flat and we know by applying what we learned above that it will be Bflat.

With this being said, the notes in F Major are as followed: F G A Bflat C D E F.

If we go down another five notes we end up at E. Now because we know we need to add another flat, the E now becomes Eflat which is E flat Major. If you look above, you will notice that E is the second flat. That is why you have to flat the E.

How To Determine The Flats & Sharps In Minor Keys

Okay, so you learned how to apply this above to Major keys, here’s how you do it for minor keys. Let’s start simple.

To figure out the sharps or flats in a minor key, we will take the minor key i chord and go up 3 notes. For example: if you go up 3 notes from a, you land on C. This means that C major is the relative major of a minor. In other words, they’re the same key signature, which has no sharps or flats.

If you’re in C major and you want to figure out what the relative minor is, you simply go down 3 notes. Go to the left of C on your piano 3 notes and you end at a.

Let’s take d minor now. Go up 3 notes from d and you land on f. F contains one flat, which is B flat. This means that the notes in d minor would be: D E F G A Bflat C D.

Why Is This So Important?

It’s important because you will notice people saying things like, “go to the minor chord in that key.” If you have no idea what key you are in, you won’t’ really be able to figure it out.

How To Apply This Easily

Okay, so your friend asks you, how many sharps are in the key of A Major. If you don’t have sheet music in front of you, the easiest way to do this is to think in your head. Start in C Major and go to the right 5 notes until you hit A. You will notice you hit G and then D, and then A. We know G has one sharp, D has two sharps and A has three sharps because you simply add them up.

By applying the order of sharps, you get these sharps: F# C# G#. It’s that simple.

One more example is to take AFlat Major. You will start on C and go down 5 notes until you get to A Flat. This means you hit F, Bflat, Eflat, Aflat. A flat has 4 flats in them, so we can now apply the order of flats. Bflat, Eflat, Aflat, Dflat.

When it comes to learning things regarding music theory, you will find that it’s all about repetition. The more you apply the order of flats and sharps, the better you will get at it. Practicing the order of sharps is helpful when practicing scales as well.

If you have found this review helpful, be sure to share it around and leave a comment! Keep practicing your craft and you will be a master of the order of sharps and flats in no time. 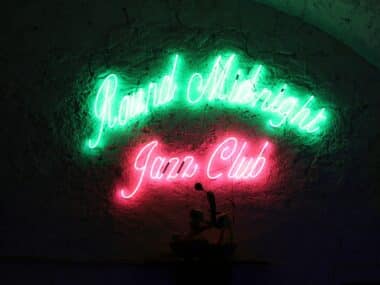 Read More
Jazz piano songs come in all tempos, difficulties, and styles. In this article, we will look at the…
Read More