What Keyboards Do Brandon Flowers Play From The Killers?

One of my biggest music obsessions has been The Killers. I have been obsessed with them ever since I heard their debut album, “Hot Fuss.” The sounds of the synths were truly what roped me into the band.

At this time I had only played piano and had zero knowledge about keyboards outside of pianos.

Over the years Brandon Flowers has used more keyboards, but their first album was heavily done on the MicroKorg. This synth became extremely popular as indie bands kept using it since they were having so much success with it. I am going to talk about a few more of the keyboards that The Killers have used below.

As I mentioned above, Brandon is known for making the MicroKorg an extremely popular synth. There are some amazing hooks that were done on it including the riff from “Smile Like You Mean It” and “Jenny Was A Friend Of Mine.” The main riff in this song is one of my favorite synth riffs of all time.

The parts that he wrote were truly amazing and I personally believe the keyboard was just perfect for the parts he was playing. They had that fun 80s vibe to them with the saw wave sounds.

Another synth that he uses is the Nord Lead 3 synthesizer. He uses these synths live and he also used them both to record on in the studio for different songs.

The Moog Voyager was used on some of their albums and this is an extremely popular synth as well.

Being Influenced By Your Idols

I was heavily influenced by Brandon Flowers and his keyboard parts as I feel like he still has some of the best melodic parts in the last 20 years. Simplistic, but beautiful is the easiest way to describe some of his amazing parts.

Some of my favorite sounds that Brandon Flowers gets in his sounds are organs. Check out my favorite organ VSTs to see what a lot of artists are using.

One thing interesting to note about Brandon Flowers synth choices is that I believe he uses mostly hardware synths.

I’m sure The Killers have definitely used VSTs, however, I know that they try to use a lot of hardware synths as well.

With this being said, here’s a list of confirmed synths he uses:

I hope you enjoyed this list of Brandon Flowers keyboards. Leave me a comment below if you are a fan of his work.

I also would like to point out that Brandon Flowers has made my list for the best keyboardists of all time. This list touches on many keyboardists from different genres and it pays tribute to those who are technical and also those who are just great writers. 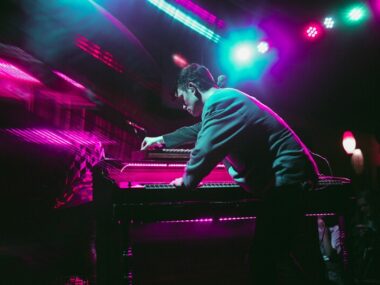 Read More
Chords are often the backbone of songs, whether it be pop, classical, or jazz. Therefore, learning to play…
Read More