I would’ve never thought that I would be writing an article on the best digital pianos under $300. This is mainly because I didn’t think they would really exist.

While there are a ton of keyboards under $300, there hasn’t been a ton of digital pianos at this price point.

With this being said, there are a few options that are worth noting. Before I jump into my picks, I want to address a couple of things that are definitely important before you buy.

Note: There are a lot of websites that overwhelm you with options. For this specific subject, I only believe that there are a few worth your money. For that reason, I’m keeping this short and sweet.

The key-action can also be lacking, however, if you’re a beginner and you’re on a budget, it will still be able to get the job done. This just means that it won’t play super-close to an acoustic piano on your fingers.

Note: I began piano lessons at the age of 9 and I used the cheapest possible Casio keyboard. While doing this I also took lessons in which I used an acoustic piano once a week. While there are great benefits to those who can afford weighted keys, it’s not a necessity.

If you’re on a budget, but still are wanting to make sure you’re making the right choice, I would recommend also checking out the best digital pianos under $500 as the price points are similar.

Let’s take at the criteria that I’ve used to grade these digital pianos below. Keep in mind that I’ve been playing keyboards for over 20 years and I’ve played pretty much every main brand digital piano model that you can.

The most important feature of a digital piano is the keys. You want to make sure the keys have good action, meaning they play similar to an acoustic piano, and that they have at least some weight to them.

Not a lot of the options under $300 have weighted keys and great action, but there is one that I highly recommend and it is my top pick below.

Note: If you want to read about where the best places to buy a digital piano are, visit the link above. These breakdown all of the keyboard retailers!

The speaker quality is not always the biggest deal. This is because you can plug in most of these options to a nice set of digital piano headphones. These will make it so you can keep the volume down, yet still, be fully into your performance.

Sometimes certain brands will bundle free software and learning programs such as Flowkey with their products. Yamaha is a company that often will bundle Flowkey with its products and I think this is great as it saves you a lot of money.

If you’re a beginner, you may want to look into digital pianos that come with additional software or piano accessories such as sustain pedals.

The sound engines on digital pianos and keyboards are going to determine the overall quality of each sound. The options that I’ve selected below all have quality sound engines for the price point.

Best & Only Option With Weighted Keys

For those looking to stick to anywhere near this price range, the Alesis Recital Pro is hands-down the best pick. It has by far the most polyphony of any option near its price.

It also has full-size hammer-action keys, which is currently the only option for under $500.

The keys feel really nice on your fingers and the key-action is also top-notch for near this price range.

With a relatively lightweight, weighing 26 pounds, the Recital Pro is perfect for playing occasional gigs. You can also power it with 6 D batteries.

Another place I was surprised by this option is in the speaker department. You have 2×20 Watt speakers as well as 2×10 Watter tweeters.

It has semi-weighted full-sized piano keys. With this being said, it definitely would be an upgrade to go to the Recital Pro for the hammer-action weighted keys.

You still have 2 built-in 20 Watt speakers and this impressive to be for this price point. There’s also a headphones jack and sustain pedal input.

There are 4 sensitivities you can switch between: fixed, soft, medium, & hard.

One more thing that is nice with this option is the fact that it has a built-in metronome.

The Yamaha Piaggero NP-32 is an option that has 76 keys rather than 88. To most beginners, this won’t be a problem, however, if you’re really wanting the 88 keys, go with an option above.

The main reason I included this option is that the piano samples are great. The key-action is surprisingly nice for not having weighted keys as well.

Something nice about the Piaggero NP-32 is that it is only 12 lbs. This is crazy to me for a digital piano, even having only 76 keys.

While it is common for most digital pianos to weigh under 50 lbs, acoustic pianos weigh, a lot more.

I hope that this list was informative and straight to the point for you.

For those who can afford a little more, I recommend check out the best 73 key stage pianos. They’re great for coffee shop gigs and also good for touring.

My top pick is easily the Recital Pro, followed by the Recital. I think that these two are leaps and bounds above the options excluding the Piaggero NP-32.

Although you may outgrow keyboards near this price range, you won’t really outgrow the Recital Pro as it has weighted keys and actually has pretty decent sounds. 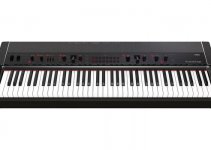 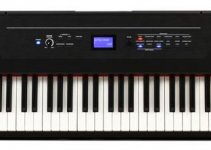 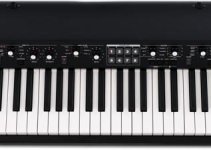